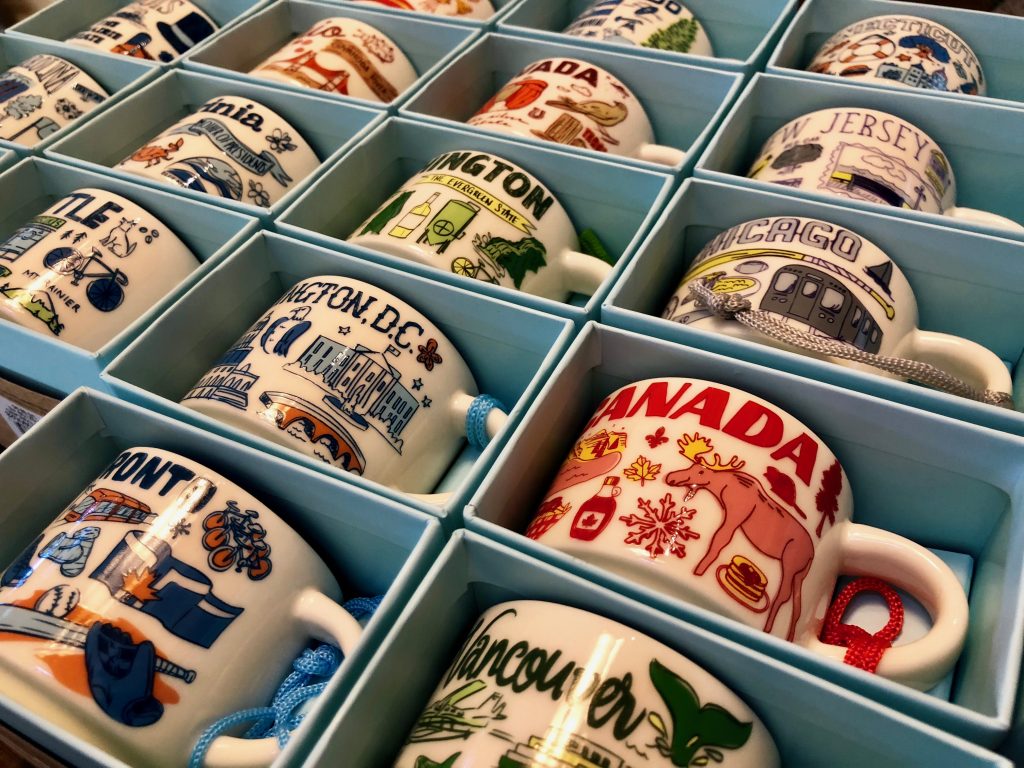 Last thing I wanted was another series of mug ornaments! Especially released at one time right before the expected holiday release. But I have to admit. I like the Been There Series (BTS) ornaments. They are a happy surprise.

Adorning each little mug are clips of art representing their locations with large and fun fonts with the place name. They are smaller, but in the writer’s opinion, better versions of the full-size mugs that Starbucks began to release last year upon the retirement of the You Are Here (YAH) series in North America. Better, because they are small and less busy. The serendipitous design translates better to a small profile. Many collectors have described them as ‘happy’.

Unlike the YAH where the ornament is an exact copy of its larger version, the BTS ornaments have a scaled down number of the little art clips. This allows the images to not be scaled so small as to be unrecognizable.

As of writing, not all the mugs are available in ornament form, and likely, or hopefully as some would lament, won’t be. At this time there are 50 US states, 10 US cities (Atlanta, Chicago, Dallas, Houston, Las Vegas, Miami, Seattle, San Francisco, Waikiki, and Washington DC), the country of Canada, and 3 Canadian cities (Niagara Falls, Toronto, and Vancouver). They officially released on September 6, 2018 with the Fall 2018 marketing campaign and are only available at select licensed Starbucks stores (such as in airports, grocery stores, Target). The suggested retail price is $9.95 USD but many of these locations, not being bound to Starbucks’ pricing structures, remove the price tag and mark them up $1-3. For many collectors this tag removal presents a frustration.

It is unclear if the ornaments are a limited release or will be around along side of the mugs for months to come. But if you are a serious collector, you won’t want to risk it. Get yours now and display a little Been There happy (even if you haven’t been there).

UPDATE: It is confirmed all the ornaments will be showing up in regular corporate stores beginning November 2 making it much easier to find for everyone! They have been identified as “Core” products and not seasonal. Additionally, a BTS version the Pike Place Market is releasing at that time as well.

2 Replies to “Been There Series Ornaments are a Happy Surprise”