What is an ornament? The Oxford Dictionary defines it this way.

A thing used to make something look more attractive but usually having no practical purpose, especially a small object such as a figurine.

But for collecting and cataloging purposes of dated items and special releases, there is a different standard of what is and is not an ‘ornament.’

I get teased a lot in our collecting circles about all of these little figurines Starbucks releases and whether I consider them ornaments or not, in particular the Key Chains. Many of the Key Chains are in fact exactly like an ornament but instead of the string, there is a key ring attachment. My filter to define what is included in the ornament catalog is the string and it is even the tag line of this site, “it don’t mean a thing if it ain’t got that string“. It seems to be the only element that separates a demitasse cup from an ornament.  Or frankly even all mugs, as some Christmas Tree ornaments are rather large.  So the string is the dividing line helping us to define what is and is not an item to be included in an official reference catalog for our collections. 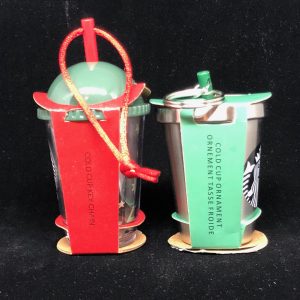 Then Starbucks released an ornament in Asia this year that had “Cold Cup Ornament” printed on the packaging but instead of a string it has the key chain attachment. This of course flummoxed me, one who is a bit of an uptight person when it comes to definitions and such.  Clearly it was NOT an ornament, so why did Starbucks call it one?  Should and would I include it in the catalog?  I purchased it just in case and have had many weeks of mental gymnastics going on in my head. It didn’t really consume me to that degree (I do have a life), but it was a decision that had to be made.

As I was preparing to photograph and catalog the Asian shipment I received, I discovered my answer!  Somewhere in the packaging design process, a mistake was made.  A cold cup ornament, which is clearly an ornament, string and all, is labeled as a Key Chain!  The two items, both cold cups, were mistakenly labeled.

And so now all is right with the world and I can rest well at night.  Key Chains, having a practical purpose, remain off of the official collecting catalog of Christmas Tree ornaments.  Put them on your tree or in your pocket if you like, there is no wrong thing to do with them in the privacy of your own home.  But as for collecting purposes, if it ain’t got that string, it don’t mean a thing.

6 Replies to “What Is An Ornament?”