The You Are Here (YAH) series of mugs has been expanding worldwide at a record pace, but until recently, the ornaments were limited to the US.  They now are crossing the border, but interestingly in very unexpected locations. 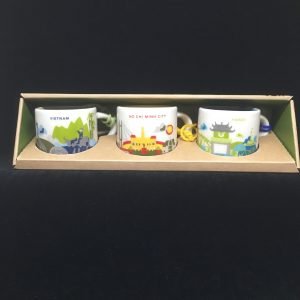 The first came out in Vietnam in a unique 3 ornament set featuring Vietnam, Ho Chi Minh City, and Hanoi and are made in Thailand.  This is the only known YAH ornament sold in a boxed set.

To date there are no other known or rumored releases.